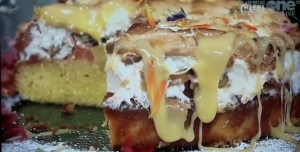 1- FOR THE SPONGE BASE
Preheat the oven to 180c,fan oven 160 c ,Gas Mark 4 .
2- Grease and line the base of a 20cm springform cake tin with grease proof paper
3- Beat together all the ingredients for the sponge in a large mixing bowl until pale and creamy about 3-4 mins
4- Spoon into the lined Tin , tapping the tin on a flat surface to help settle the batter
5- Bake for 20-25 mins until golden in colour ,risen and dry to touch
6- Test with a toothpick ,it should come out clean from the centre
7- Remove to a wire rack to cool

FOR THE RHUBARB
1- Combine the sugar ,water and vanilla pod in a large ,heavy based saucepan set over a moderate heat
2- Cook until the sugar has dissolved and a sugar syrup forms .
3- Stir in the Rhubarb ,cover with a lid and remove the pan from the heat .
4- Let it cool to room temperature

FOR THE MERINGUE
1- Beat the egg whites with the salt and cream of tartar in a large ,oil free mixing bowl until softly peaked .Gradually fold in the sugar
2-Preheat the oven to 230 c ,Fan Oven 210 c ,Gas Mark 8 .
3- Strain the poached Rhubarb into a clean mixing bowl .
4- Add the meringue to the Rhubarb and fold gently but thoroughly until combined.
5-Spoon on top of the sponge base , spreading the top flat .
6- Bake for 10-15 mins until the top is just browned and a thin crust has formed .
7- Melt the chocolate and Double cream in a bowl over a pot of boiling water until smooth and combined ,take off the heat and leave to cool slightly
8- Take Sponge out of oven and allow to cool briefly before turning out and serving on a cake stand or platter
9- Drizzle over white chocolate sauce and garnish with edible flowers , dust with icing sugar and serve .